Pat O'Daniel and his Hillbilly Boys 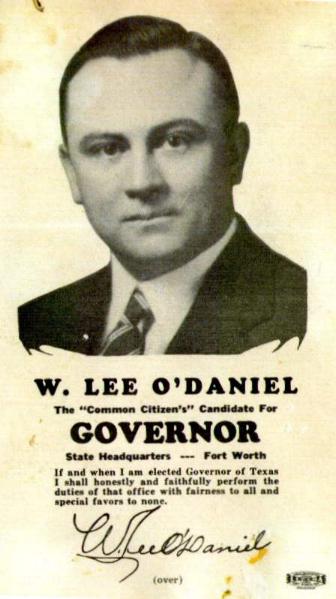 Pat O'Daniel and his Hillbilly Boys

Played by a real hillbilly band.

So while we sing and play

And try to make folks happy,

Reviewer: bstepno - favoritefavoritefavorite - July 1, 2013
Subject: More programs and details
After stumbling this page and getting annoyed at the lack of information about the program, I stumbled on the fact that the Old Time Radio Researchers Group has an updated and more researched collection of 74 episodes elsewhere at the Archive, both in "Singles" (playable) form and as three large zip files, including documents:

There's also am article in the group's Feb.2008 newsletter:
http://www.otrr.org/FILES/Times_Archive_pdf/2008_02Feb.pdf

"Please pass the biscuits Pappy!" was a familiar call heard on Texas depression era radio emanating from Ft. Worth. Led by Burrus flour mill sales manager, Wilbert Lee O'Daniel, the Hillbilly Boy's daily (noon?) fifteen minutes of hot licks and happy patter roused citizenry to the point of electing the colorful W. Lee O'Daniel to a term as Governor! In 1941 he successfully beat out Lyndon Johnson for a seat in the Senate.

Fans of the movie "O Brother, Where Art Thou?" might be interested to know that the "Governor Menelaus 'Pappy' O'Daniel" character played by Charles Durning is in fact based upon the real life character W. Lee O'Daniel. Coincidence doesn't stop there. The young blues guitar player's character (Tommy Johnson) is loosely based on famed blues legend Robert Johnson, whose skill with the guitar after journeying a spell in the Mississippi delta area, was so improved that folks said he sold his soul to the devil at a crossroads meeting to get it. Not only that, the only recordings we have from the short life of Robert Johnson were the result of a single recording session on November 23, 1936, "unceremoniously squeezed between W.Lee O'Daniel & His Hillbilly Boys the day before, and Hermanas Baraza con guitarras the day after." Unfortunately, neither Hillbilly Boys nor Robert Johnson recordings are to be found anywhere in the "O Brother, Where Art Thou" soundtrack.

In 1931, Bob Wills pursuaded Burrus Mill and Elevator Company under the presidentship of W. Lee O'Daniel to sponsor his band in a radio program to advertise the Burrus lightcrust flour. In 1935, after a series of disputes, Wills was fired. O'Daniel then formed his own band "The Hillbilly Boys" and his own flour "Hillbilly Flour". With this band he stomped and successfully won the 1938 gubernatorial race.
Reviewer: spyder550 - favoritefavoritefavoritefavoritefavorite - June 8, 2007
Subject: Is there a file missing? Number 39?
I would hate to see an incomplete archive of this. This is remarkable stuff.
Reviewer: Pumpelly - - June 5, 2007
Subject: Pappy O'Daniel?
The correct name is Pappy O'Daniel & His Hillbilly Boys. Pappy originally sold "Light Crust Dough" through his first group, "The Light Crust Doughboys".

Pappy (W. Lee O'Daniel) was a flour salesman and radio announcer who took to radio to sell more flour in 1927. His show consisted of down home tunes that O'Daniel wrote for the broadcasts, homespun stories, and old time religious poems and songs.

In 1935 Pappy stopped selling flour for others and started selling it for himself - Hillbilly Flour, and he then started his own show. The show opened with a request to "Please pass the biscuits Pappy", and amidst fiddles and guitars of the Hillbilly Boys Pappy's friendly and fatherly voice could be heard. P

Pappy ran for governor of Texas and was elected in 1936(?), due mostly to his radio show and the recognition he got from it. Pappy's show was the most popular radio show in Texas history at the time. One of his political slogans was "Flour Not Pork".
Reviewer: Daniel Beller - favoritefavoritefavoritefavoritefavorite - May 25, 2007
Subject: A piece of magic
I think we all have to thank the individual that uploaded these files and IA for hosting this magic piece of american culture. These rare takes give a taste of unadultered and pure hillbilly music, as played in the 1930's. Getting to know the musical roots of this country and sharing with the IA community these 70+ year old broadcasts, will open a door to present generations, who grow up on "American Idol" and the like, to see where true music comes from.
Back in the 1930's, during the first years of electric recording, putting the music onto a shellac disk, involved just the performer(s) and a recording engeneer. No fancy effect and no digital editing. In other words, the music came from the heart and soul, not from a sequencer. That's why so much music from that era sounds so delightful.
Pat O'Daniel and his Hillbilly Boys left us these broadcast takes for us to enjoy and learn. Recommended.